Kedarkantha is a mountain peak of the Himalayas in Uttarakhand, India. Its elevation is 12,500 ft (3,800 m).Kedarkantha is located within Govind Wildlife Sanctuary in Uttarkashi district.

A trek to the peak of Kedarkantha usually starts from Sankri, a small village, and takes four days to complete.

There are several myths around Kedarkantha and Juda ka Talab, a high altitude lake.

One legend has it that Lord Shiva sat at the summit to meditate but was disturbed by a bull running below. He instead went to Kedarnath, a town in Uttarakhand, to meditate.

Another local myth relates to the Pandavas, who went to the Himalayas to seek Lord Shiva’s blessings. He hid from Bheem and disguised himself as a bull. But Bheem recognized him and went after him. So Shiva hid underground. When he rushed out of his hiding place, he let his body parts get divided, and each part fell at a different place. His throat fell on the Kedarkantha, thus earning the peak its name- transliteration- “the throat of Lord Shiva”.

A legend recounts that the Pandavas sought Lord Shiva to pardon them for their sins on the advice of Lord Krishna. They had killed their kin during the Mahabharata. Shiva was angry with them for their conduct and avoided them by taking the form of a bull and leaving for the Garhwal region. The Pandavas sighted Shiva grazing as a bull in the hills of Guptakashi and tried to grab its tail and legs forcibly. The bull disappeared into the ground and later reappeared as Lord Shiva at five places- the hump at Kedarnath, the legs at Tungnath, its face at Rudranath, its stomach at Madhyamaheswar, and its hair at Kalpeshwar. 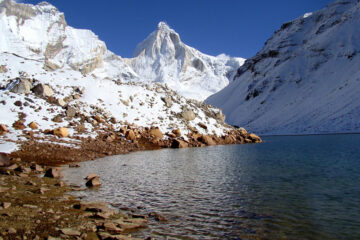 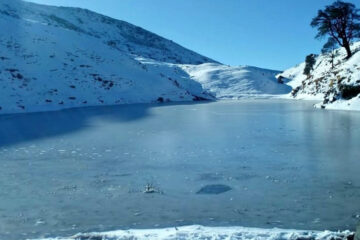 Soaked in mythologies, Brahmatal Lake is located in 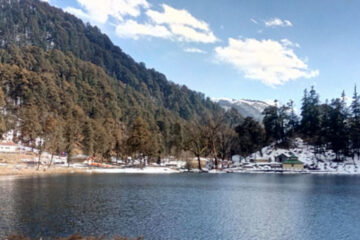 Dodital is a freshwater lake in Uttarkashi
One tour per person